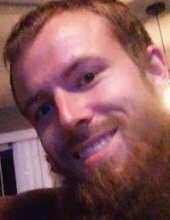 Growing up Robert played on numerous little league football, baseball, and basketball teams; his athletic ability was obvious and often noted by his coaches. Robert attended the Pleasant Hill High School. After high school Robert worked as a landscaper for Kohler Lawn and Outdoor, and then worked a stint with the Wilmoth Basement Company, eventually returning to Kohler where he followed his true passion of working outdoors and with his hands, of which he had a special talent for landscape design. His work ethic and love for creating made him a valued employee. Robert attended the Strasburg Baptist Church in his younger years and later attended the Big Creek Baptist Church. Robert loved cars and was particularly adept at fixing them. Robert particularly enjoyed his many trips to Pick-n-Pull where he would spend countless hours searching for parts and he would always get the best deal possible on his purchases. There was really nothing that Robert wouldn’t attempt to fix or couldn’t fix and he thrived on the challenge of making something work again. He was an avid fisherman and enjoyed many hours with his line in the pond and being outdoors.

Most important to Robert was his family; especially his kids. Robert was a loving, devoted father and partner. Robert’s family was the apple of his eye and he was their hero. Robert’s happiest times were spent with Paige and the kids, whether it was at home, running around town, or trips to special places where they made precious memories.

Robert is survived by his fiancé Paige Wilhelm of the home; two children, Landyn and Macy, both of the home; his mother Beverly Starks and husband Pete Martin of Pleasant Hill; three brothers, Justin Starks, Steven Starks, and Luke Starks, all of Pleasant Hill; one sister, Sarah Starks of Independence; also one brother’s Tim McCale and Austin Ethington; two sisters, sisters Tiffany McCale-Parris and Jessica McCale; other relatives and many friends.

A memorial service will be held 10:00 a.m. Saturday, February 22, 2020, at the funeral home. Reverend Chris Williams will officiate.

Online condolences may be sent to the family at www.stanleydickeyfuneralhome.com
To order memorial trees or send flowers to the family in memory of John Robert Starks, please visit our flower store.