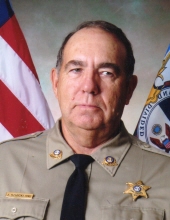 John Spurgeon Strickland was born on February 28, 1940 in Woodward, OK to Gerald and Iva (Bell) Strickland. John moved from Woodward, OK his senior year and attended the Kansas City Christian College and Bible School. It was there that he met Carol Sewell. John and Carol were married on June 20, 1958. After marriage John and Carol move to Freedom, OK where John worked as a ranch hand for 5 years. In 1963 they moved to Nevada, MO where John worked as a tree trimmer. After a year,the family moved outside of Harrisonville, MO where they lived for 42 years until they moved one last time to Lowry City, MO in 2006.
From 1982 to 2002 John worked full-time with the Cass County Sheriff’s Department as a Deputy. When he retired in 2002, he had achieved the rank of Lieutenant. John then served 10 additional years with the reserves for the Cass County Sheriff’s Department.
John served as a board member of the Osceola Church of the Nazarene and his strong faith in Jesus Christ as his Savior sustained him through his battle with cancer. John continued to witness about his love for Jesus through his smile, his ballcaps, and his stories. His testimony about the Lord’s blessings in his life were a favorite story he told. John loved Jesus, his family, hunting, fishing, gardening and taking care of the church yard.
John was involved with the Rural Letter Carriers Auxiliary and he and Carol took as many grandchildren as they could to the State Rural Letter Carrier annual conventions. John and Carol also traveled to National Rural Carrier Conventions all over the United States. Between the National Rural Carrier Conventions and church mission trips they traveled many, many miles together including visiting Hawaii and Alaska.
John received his private pilot’s license in 1977,served on the board of the Community Betterment of Lowry City, was a member of the Kansas City Metropolitan Metro Squad, a member of the Missouri Deputy Sheriff’s Association and was a proud NRA member.
John also served as a Scout leader and Pack leader with the Boys Scouts of America. He was an Honorary Warrior in the Tribe of Mic-O-Say. Some of John’s favorite memories was going to Scout camp each year with his three sons.
Preceded in death by his parents, son, Wesley Dean Strickland; 2 granddaughters, Rachel Raeleen Costley and Lisa Marie Strickland; 2 sisters, Jerry Hillsman and Joyce Hughes.
John is survived by his wife, Carol Strickland of the home; 4 children, Rebecca Costley (Harold), Lamar, MO, Randall Strickland (Teresa), Harrisonville, MO, Russell Strickland, Sheldon, MO, Ross Strickland (Cheryl), Pleasant Hope, MO; grandchildren, Joseph (Heather) Costley, Katelyn (Kaleb) Marti, Mark Costley, Kris (Jacob) Becker, Andrew (Christine) Strickland, Jessica (Sammy) Martinez; Colton Strickland; Trent Strickland; Stacie (Wes) Morris; Lacey (Stephen) Gerry, Justin (Morgan) Macklin, Trevor Macklin, Bailey Kennedy, Kayla Kennedy; great-grandchildren, Dalton, Riley, Emma Sue, Annabeth, James, Wicklow, Fitz, Thomas, Lucas, Cayden, Kylee, Kyra, Maliyah, Brooklyn, August, Bentley, Robert, Peyton, Eliana, Andrew, Isabella and Illiana; a brother, James Strickland, Fairbanks, AK; other relatives and many friends.

Family suggests memorial contributions may be made to the Osceola Church of the Nazarene Memorial Fund.
To order memorial trees or send flowers to the family in memory of John S. Strickland, please visit our flower store.