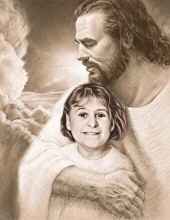 Jordan Marie Zenor-Overcast of Harrisonville, Missouri was born March 24, 2008 in Kansas City, Missouri the daughter of Misty Marie Overcast and Jason Edwards Zenor. She departed this life on Wednesday, May 11, 2022 at Belton Regional Medical Center, Belton, Missouri surrounded by love and family at the age of 14 years, 1 month and 17 days.

Jordan was a 7th grade student at Harrisonville Middle School, and a member of Our Lady of Lourdes Catholic Church in Harrisonville. She was diagnosed with terminal brain cancer at the age of 23 months on February 2, 2010. After a long grueling brain surgery of 8 hours, Doctors told the family that she would not survive pass the age of 5 years. Long extensive treatment and hospital stays and surgeries including radiation and chemo therapy which each time took a little more away from her. Jordan surpassed the Doctors predication of 5 years and fought with everything she had. Her motto was “fight like a girl”. Once again we were given the news in 2015 that after her 7th birthday that two more tumors were at the center of her brain. Once again in May of 2015, Jordan had long grueling surgery to try to remove as much of the tumor as possible. After the surgery they would start radiation again. Radiation and chemo therapy unfortunately left a lot of residual damage to Jordan’s sweet precious body, including her lungs and that would ultimately rear its ugly head. After long stays in the hospital the past two years with a mysterious disease plaguing her lungs, Jordan had a grand maul seizure and passed away.

Memorial contributions may be made to the Jordan Zenor-Overcast Memorial Fund and make checks payable to Donna Overcast or Today, Tomorrow Fund at the Our Lady of Lourdes Catholic Church.

To order memorial trees or send flowers to the family in memory of Jordan Marie Zenor-Overcast, please visit our flower store.