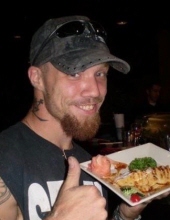 Joseph Aaron Griffith, 37, of Blasdell, New York, formerly of Odessa and Pleasant Hill, was born, December 31, 1980 in Kansas City, the son of Lawrence Allen, Jr. and Cathy Gaye (Greer) Griffith. He departed this life, Monday, July 16, 2018, at his home.

On September 14, 2007, he was united in marriage to Ada Ho Chi Chan in Independence. They later divorced but remained good friends.

Joe was born with a huge heart and a deep passion for family, friends and animals. He was an amazing chef, artist, musician, woodworker, carpenter, creative builder and adventurer. He was incredibly artistic and talented, an awesome song writer, guitarist, drummer, pianist, and an amazing tattoo artist. He was dedicated to it and it became his talent, because he was full of passions and love.

Joe was preceded in death by his father Lawrence Allen Griffith, Jr. and his brother, Joshua Griffith.

He is survived by his mother Cathy Griffith of Higginsville; two sisters, Angela (and Jason) Scarborough of Odessa, and Christina (and Gareth) Stevenson of Ruckersville, Virginia; half sister, Sherry Goad of Raytown; sister-in-law, Jonya Griffith of Independence; his nephews Dillion, Kyle, Emmett, Evan, and Jonah; and his nieces Savana, Ellory, Elizebeth and Jaclyn. Joseph will also be lovingly remembered by his former wife, Ada Ho Chi Chan; his former step-daughter, Joey Lo; his former father-in-law, Raymond Chan; his former brothers-in-law Robert Scott and Simon Chan; his former sister-in-law Daisy Chan and his former nephews Robbie and Robbin. He will also be forever remembered by many extended family and dear friends.

Memorial contributions in memory of Joseph may be made to Cathy Griffith.