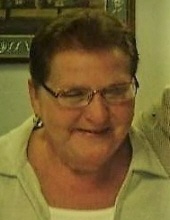 Judy was united in marriage to Joseph Martley on November 30, 1962, in Harrisonville. He preceded her in death in November 2014.

Judy was a homemaker. She enjoyed bowling, flowers, collecting antiques and crystal. She especially loved decorating her home for all holidays, especially Christmas.

Judy was also preceded in death by her parents.

She is survived by her six children, Robert (and Pamela) Morgan of Freeman, Cherryl Morgan of Pleasant Hill, John (and Jan) Morgan of Belton, Phillip (and Connie) Martley of Harrisonville, Brian (and Tara) Martley of Holden, and Joelene (and Steve) Clayrborn of Garden City; eight grandchildren, Courtney, Justin, Josh, Chris, David, Dillion, McKenzie, and Kaylee; five great grandchildren; her brother, Jerry Wiedemman of Garden City; other relatives and friends.

Cremation has been accorded. No services are scheduled.

Memorial contributions are suggested to Cass County on Aging and may be sent in care of the funeral home.