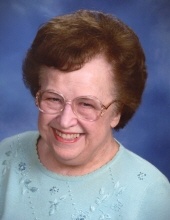 Kathleen Hedden age 94 of Harrisonville, Missouri departed this life on Friday, January 31, 2020 at her home in Harrisonville after a brief illness. She was born March 6, 1925 at home in Latour, Missouri, the daughter of George Alonzo and Maudie Jewel (Tremain) Voyles.

She married Willard W. Hedden on August 25, 1945 in Olathe, Kansas. They resided in Raytown, Missouri until 1962 when they moved to Napa, California (her dream move). They lived in Napa for 22 years until her husband's retirement, then moved to Harrisonville, Missouri in July of 1985.

Kathleen did secretarial work most of her life retiring from Montgomery Ward at the age of 65. She was a member of the First Baptist Church in Harrisonville.

She was preceded in death by her parents, her husband, Willard and her two sisters, Kathryn Poling and June Cowan. She is survived by her nieces and nephews and their families. She will be greatly missed by all.

Family suggests memorial contributions may be made to the First Baptist Church of Harrisonville Memorial Fund or to the Elm Springs Cemetery Association.
To order memorial trees or send flowers to the family in memory of Kathleen Hedden, please visit our flower store.