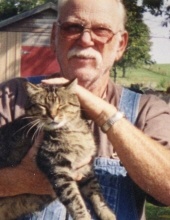 On December 14, 1968, Kenneth was united in marriage to Charlotte O’Donna (Warren) Walker in Kansas City, Missouri.

Kenneth was a carpenter and earlier was employed as an auto work for GM Leed’s Plant for 15 years. He was an outdoors man who loved to hunt and fish and loved his cats and dogs. Kenneth was always working on a project or building something. He had lived near Drexel, Missouri before moving to Creighton in 1991.

Besides his parents, he was preceded in death by a grandson, Adam Walker and a brother, Bill Kite.

Cremation. No services are scheduled.

Arrangements are under the direction of the Dickey Funeral Home, Garden City, Missouri.
To order memorial trees or send flowers to the family in memory of Kenneth Neal Kite, Sr., please visit our flower store.