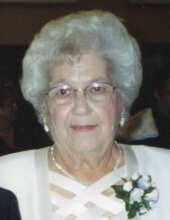 Alma LaVerne Kane, of Harrisonville, Missouri was born January 22, 1923 in Kansas City, Kansas the daughter of Cecil Henry and Beulah Fountain (McBride) Barnes. She departed this life on Thursday, November 22, 2018 at her home at the age of 95 years and 10 months.

On August 19, 1954, LaVerne was united in marriage to Felix Francis Kane Sr. in Yuma, Arizona.

LaVerne was a homemaker and enjoyed being around family especially her grandchildren. She was a member of the First Baptist Church, East Lynne, Missouri. LaVerne loved camping and traveling in her RV with her husband, Felix and collect dolls and angel figurines. She fondly remembers the times she welded ships for World War II in Los Angeles.

Besides her parents, she was preceded in death by her husband, Felix Kane on February 26, 2018; a son, Robert “Bob” D. Moser and 7 brothers and sisters.

Family suggests memorial contributions may be made to the East Lynne Baptist Church Memorial Fund, East Lynne, Missouri.
To order memorial trees or send flowers to the family in memory of LaVerne Kane, please visit our flower store.