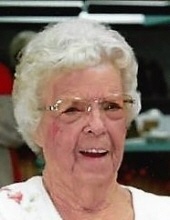 Lavoy Marie Hart, 88, of Pleasant Hill, was born, April 23, 1931, in Pleasant Hill, the daughter of Bennie Luther and Frona Ann (Hilbrant) Lewis. She departed this life, Friday, March 27, 2020, at her home surrounded with love and family.

On December 17, 1949, she was united in marriage to Vernon Breen Hart in Pleasant Hill. They enjoyed over 70 years of marriage.

Lavoy worked at Sears and Roebuck and Western Electric. In 1968, she became a full time homemaker. She and Vernon also worked a small farm together on a farm south of Strasburg. She was a member of the Strasburg Union Church. They were also members of the Good Sam Club RV traveling Club. She enjoyed working out on their farm and traveling. She loved playing pool and for the past twenty-five years she was a member of the South Texas pool league.

Lavoy was preceded in death by her parents; one grandson Nick Rogers; one brother, Russell Lewis; and two sisters, Margaret Spiwak and Ann Fowler.

A celebration of life gathering will be held at a later date. The location and date will be published here when that information becomes available.