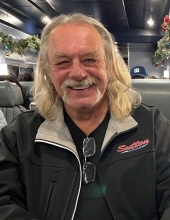 LeRoy was born October 10, 1952 in Harrisonville, Missouri the son of the late Robert “Bob” and Bobbie (Lusher) Tschudi. He grew up in Creighton, Missouri where he attended and graduated from Sherwood High School in 1970.

On August 30, 1974, LeRoy was united in marriage to Vivian “Vicki” Gregory. To this union two children were born, Amanda and Ryan.

LeRoy spent his working years as a truck driver. In 1982, Jim and Lavonne Sutton purchased a second truck for their business “Sutton Trucking”. They hired a local driver named LeRoy. After 35 years of hard work and loyalty he retired in November of 2017. Also, while working long hours he managed to farm. After his retirement, he enjoyed spending time with the grandkids, traveling, hauling grain and helping WestCentral Agri of Adrian, Missouri. Most mornings you would find him visiting the local restaurants.

Besides his parents, he was preceded in death by a brother and three infant siblings.

LeRoy is survived by his wife of 47 years, Vicki Tschudi of the home; a daughter, Amanda Brown and husband Jeb and grandchildren, Rylee and Caleb Brown of Oak Grove, Missouri; a son, Ryan Tschudi and wife Tiffany and grandson, Ethan Tschudi of Archie, Missouri. He will also be missed by several nieces, nephews, other relatives and many friends.

Cremation. A Celebration of Life Service will be 2:30 p.m., Friday, March 25, 2022 at the Dickey Funeral Home, Harrisonville, Missouri with inurnment in the Mullin Cemetery near Urich, Missouri at a later date.

Family suggests memorial contributions may be made to the Mullin Cemetery Association, Frontier Village, Adrian, Missouri or to the family.

To order memorial trees or send flowers to the family in memory of LeRoy Tschudi, please visit our flower store.