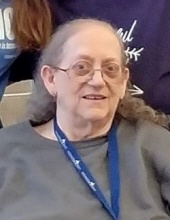 Linda was employed by Russell Stovers in Kansas City, Missouri for over 30 years. She also taught MDC Hunter Safety courses for 22 yrs and received a Lifetime of Achievement award for over 3,000 hours of volunteer service. Linda enjoyed camping, traveling, working puzzles, and crocheting afghans. Over the years, she has made many beautiful projects for family and friends.

Besides her parents, she was preceded in death by her husband, Jim Rhea on July 21, 2017; her brother, James Lee Wolfe; two sisters, Darlene Olsen and Lois McCollum; one niece, Jennifer Wolfe; and one nephew, Johnny McCollum.

Linda is survived by her son, James Adam Rhea; one sister-in-law, Becky Wolfe; three nieces, Robin Marlin, Cynthia Jameson, and Sheryl McCollum along with many more relatives and friends.

Linda will be buried at Dutch Chapel Cemetery near Lynchburg, MO.

Funeral arrangements are under the direction of the Dickey Funeral Home, Harrisonville, Missouri.
To order memorial trees or send flowers to the family in memory of Linda Kaye Rhea, please visit our flower store.