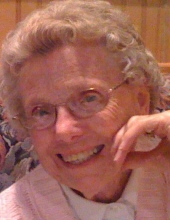 Lois Fern Mayfield, 97, of Lake Forest, California, formerly of Pleasant Hill, Missouri, was born Wednesday, December 21, 1921, in Amsterdam, Missouri, the daughter of Harry and Etta (Frances) Coffel. She departed this life Thursday, August 1, 2019 at her home surrounded the love of friends and family.

Fern was united in marriage to Benny Earl Mayfield on October 15, 1949, at the First Baptist in Drexel, Missouri. He preceded her in death on November 22, 2008.

Before marriage, Fern was a telephone operator in Butler, Missouri. She started this job around 1941 and served in this capacity all during World War II. In her job, she had a front-row seat to world events, as well as the loss and suffering experienced by members of the Butler community.

After marriage, Ben and Fern moved to Pleasant Hill, where they eventually purchased a home in 1949 at 909 Washington Street. They resided in this home for almost 60 years, which was the site of Ben’s memorable vegetable garden, and the famous haunted houses excursions that they made available annually in their decorated house.

In 1964, Fern took up selling Avon Products in Pleasant Hill, a job which she continued until after Ben’s death. She won many awards, trophies, and mementos from the Avon company to recognize her outstanding service as an Avon representative.

Following Ben’s passing Fern moved to California in 2010 to live with her daughter, Connie. Although she mourned Ben’s passing and her loss of contact with her midwestern roots, she soon came to love living in California, with the beaches and palm trees and always-sunny weather. She soon because a sandal-wearing, California hippy, as she described herself, stating that she did not want to return to the cold weather until God called her home.

In her final years, she was adopted as a surrogate mother by most of Connie’s friends, who themselves had already lost their mothers. She often laughed that although she had moved away from her roots in the Midwest, she had gained more adopted daughters than she could count.

Unknown to most people during her final years, Fern fought a long battle with dementia, but although she had little short-term memory, she never lost her personality, her love of people, and her sense of humor.

Fern was also preceded in death by her parents; her daughter, Connie on May 20, 2019 and all her siblings, Margaret Evelyn Davidson, Ruby Edith Erickson, Harry Lee Coffel, Howard Dean Coffel, and Donald Ray Coffel.

She is survived by many nieces and nephews, cousins, other relatives, and dear friends.

Graveside services for both Connie and Fern were held Saturday, October 12th, 2019 at the Pleasant Hill Cemetery. Reverend James Wilkins officiated. A reception followed the service at the Pleasant Hill United Methodist Church so that friends and families from both the Midwest and West Coast could share in their loving memories of Fern.

In lieu of flowers, memorial contributions are suggested to the American Cancer Society or the Alzheimer’s Organization and may be sent in care of the funeral home.