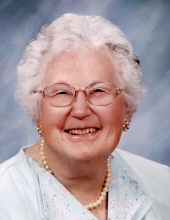 Lois Katrina Brigance, of Harrisonville, Missouri was born January 11, 1920 in Waldron, Arkansas the daughter of Roy and Martha Sue (Hunsucker) Sehorn. She departed this life on Sunday, May 26, 2019 at her home in Harrisonville at the age of 99 years, 4 months and 15 days.

On September 24, 1945, Lois was united in marriage to Loyd G. Brigance in Waldron, Arkansas.

Lois was employed as a tax examiner for the IRS Banister Service Center, Kansas City, Missouri until her retirement in 1981. She was a 60+ year member of the First Baptist Church, Harrisonville where she taught Sunday School for over 30 years and helped with VBS for over 20 years. Lois was a member or the Cass Medical Center Auxiliary. She enjoyed growing a vegetable garden, planting and growing flowers and feeding the birds.

Besides her parents, she was preceded in death by her husband, Loyd Brigance on May 9, 1999; a son, Gerald L. Brigance on October 19, 1999; an infant grandson, Michael Brigance; several brothers and sisters.

Funeral service were held Tuesday, June 4, 2019 at the Dickey Funeral Home, Harrisonville, Missouri with burial in the Orient Cemetery, Harrisonville.

The family received friends Tuesday, June 4, 2019 at the funeral home.

Family suggests memorial contributions may be made to the First Baptist Church, Harrisonville, Missouri Memorial Fund and may be left at the funeral home.
To order memorial trees or send flowers to the family in memory of Lois K. Brigance, please visit our flower store.