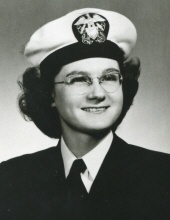 Helen Louise “Lou” Feeback, 94, of Latour, Missouri was born February 5, 1927 in Belvenville, Wisconsin the daughter of Henry and Jennie (DuCharme) Teubert. She departed this life on Thursday, April 22, 2021 at the Crown Care Center, Harrisonville, Missouri.

Lou Feeback was an extraordinary nurse, mother and Christian. She loved her family, her God and her country in equal measure.

She left her native Wisconsin to serve her country in the U.S. Navy. She treasured her years as a Navy nurse and officer. In the Navy she met Don Feeback, a farm boy with a work ethic to match her own and a dream of getting somewhere. After mustering out in south Texas, the young couple and their first son headed back to Missouri where Lou worked in the emergency room while Don finished college and then graduate school. Then off they went into the wilds of Oklahoma for his first posting as a hospital administrator. In Oklahoma City a second son was born.

Eventually they made their way back to Don’s home territory in central Missouri and settled down to raise a family that soon included a third son. Lou taught good Navy order and discipline to her three boys. Get up, make your bed, get on with it, was her guiding principle and she passed it on. With strength of will and determination she saw her boys baptized, made Eagle Scouts and college graduates. Her love was always evident, her powers of persuasion considerable, her devotion to her family unmatched.

Late in life she undertook chores, family gatherings and quilting with the same determination she displayed all her life. When her beloved Don passed away she carried on. They had plotted a 15-acre lawn and planted 100 trees around their retirement home in LaTour. For more than two decades she maintained the vast expanse of green, logging a million miles on a diesel John Deere garden tractor.

In her spare time she cross-stitched and quilted heirlooms by the score. She was a dedicated member of the Rose Hill Baptist Church and especially loved sunrise Easter service followed by a dinner she had spent days preparing for her extended family.

Lou Feeback was a devout Christian, loving wife, mother and grandmother. She is currently in heaven making sure things are getting done and beds are being made correctly.

Besides her parents, she was preceded in death by her husband, L. Don Feeback on January 22, 1998; a son, Mathew Feeback, August 3, 2019; a sister, Pricilla Scott and a brother-in-law, Thomas Thebo.

Funeral services will be 11:00 a.m., Tuesday, April 27, 2021 at the Dickey Funeral Home, Harrisonville, Missouri with burial in the Rose Hill Cemetery, Latour, Missouri.

If you are attending the visitation or service, the family requests that you would wear a mask and practice social distancing.
To order memorial trees or send flowers to the family in memory of Lou Feeback, please visit our flower store.