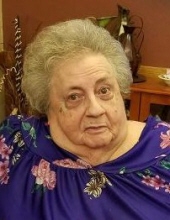 Mary Louise Crawford, 91, of Pleasant Hill, was born, August 8, 1930, in Urich, Missouri, the daughter of Charles M. and Ona (Lawson) Bohannon. She departed this life, Thursday, September 9, 2021, at the Carnegie Village Rehabilitation and Health Care Center.

Louise grew up in the Urich area attending the Quick City School. They later moved to Holden and then to Pleasant Hill in 1947. On November 28, 1947, she was united in marriage to John Medford Crawford in Pleasant Hill. He preceded her in death on May 13, 1986.

She babysat in her home for 45 years from 1955 to 1999. She cared for many children through the years, even some 2nd generations. She was a great influence to all. She was a member of the First Baptist Church. She enjoyed reading, and watching crime stories on T.V. She especially enjoyed spending time with her kids and grandkids. Louise was also known for her love of cooking and canning. She loved to cook for the hay hands. Her recipes will always be treasured.

Funeral services will be held at 10:30 a.m. Friday, September 17, 2021, at the funeral home. Reverend Tim Casteel will officiate. Interment will be in the Pleasant Hill Cemetery.

Memorial contributions are suggested to the St. Jude Children’s Hospital, Amedisys Hospice, or the American Heart Association, and may be sent in care of the funeral home.

Online condolences may be sent to family at www.stanleydickeyfuneralhome.com