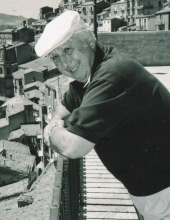 Luke Scavuzzo, 94, Harrisonville, Missouri departed this life on Tuesday, April 12, 2022 with loving family at his side. Luke was most proud of two things, his family and his community.

He married Gwendolyn “Sissy” Hendryx on August 15, 1948. They never turned down an opportunity to dance. He is survived by his wife; daughter Nicola Clark and husband Bill, Harrisonville, Missouri; son, Luke A. Scavuzzo and wife Candace, Harrisonville, Missouri; daughter Lisa Cartee and husband Jack, Jefferson City, Missouri; 6 grandchildren; 5 great-grandchildren; and many other dear relatives. He treasured traveling with his family and would do nearly anything to make them laugh.

Luke valued serving his country and his community. He served in the Navy from 1946 - 1948. After graduating from Missouri Valley College in Marshall, MO, he owned and operated Scavuzzo’s Grocery with his four brothers, Cosmo, Tony, Salvatore and Joe. It was originally opened by Luke’s father, Santo (Charlie) and uncle, Sam. The grocery store was a fixture in the community for 77 years. Luke also had two sisters Ida and Faustina. All of his siblings preceded him in death.

Funeral Mass will be 11:00 a.m., Wednesday, April 20, 2022 at Our Lady Of Lourdes Catholic Church, Harrisonville, Missouri. Burial will be in the Orient Cemetery, Harrisonville with Military Honors.

Family suggests memorial contributions may be made to the Harrisonville School Foundation.
To order memorial trees or send flowers to the family in memory of Luke Scavuzzo, please visit our flower store.