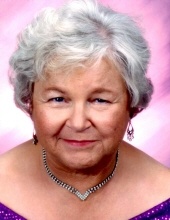 Mae Evelyn Miller of Urich, Missouri was born January 22, 1942 in Lucus, Missouri the daughter of Edgar Martin and Maxine Mae (Ryan) Copeland. She departed this life Wednesday, July 11, 2018 at her home near Urich at the age of 76 years, 5 months and 19 days.

On July 22, 1957 Mae was united in marriage to Hobert Dean Miller of Harrisonville, MIssouri.

Mae was a homemaker and was employed as a school bus driver for the Ballard School District for 10 years and for the Sherwood School District for 27 years until her retirement in December of 2014. She was a faithful member of the Cove Creek Christian Church. Mae enjoyed decorating cakes, listening to country music and taking care of her grandchildren. In her earlier years, she enjoyed fishing and hunting with Hobert.

Besides her parents, Mae was preceded in death by her two brothers, Lynn Copeland of Enid, Oklahoma and Jim Copeland of Archie, Missouri.

Funeral services were held Wednesday, July 18, 2018 at the Dickey Funeral Home, Garden City, Missouri. Burial is in the Johnstown Cemetery near Montrose, Missouri.

The family suggest that memorial contributions may be made to the American Heart Association.
To order memorial trees or send flowers to the family in memory of Mae Evelyn Miller, please visit our flower store.