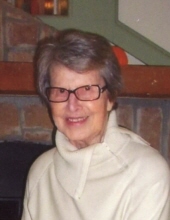 Margaret "Marge" I. Cook of Harrisonville, Missouri was born September 10, 1929 near Warsaw, Missouri the daughter of John and Osa (Wisdom) Duke. She departed this life on Tuesday, December 18, 2018 at the Crown Care Center, Harrisonville at the age of 89 years, 3 months and 18 days.

On September 5, 1972, Marge was united in marriage to Milburn Lee Cook in Gunnison, Colorado.

Marge was employed as an operator for AT&T until her retirement. Earlier she was employed at Newman's Department Store in Arkansas City, Kansas. Marge loved to travel with her husband and go shopping.

Graveside service were held Friday, December 21, 2018 at the Garden City Cemetery, Garden City, Missouri.
To order memorial trees or send flowers to the family in memory of Margaret "Marge" I. Cook, please visit our flower store.