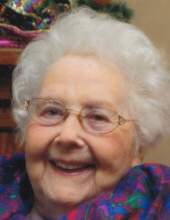 Marie Mabel (White) Wray, of Harrisonville, Missouri was born May 21, 1920 near Moberly, Missouri the daughter of Leonard Gilbert and Waverly Norton (Lawrence) White. She departed this life on Sunday, May 5, 2019 at Meadowview of Harrisonville Health and Rehab at the age of 98 years, 11 months and 14 days.

Marie was employed as a cashier for the Muehlebach Hotel in Kansas City until her retirement in 1984. She was a heck of a sales lady and had worked for several clothing businesses in the Kansas City area. Marie enjoyed her time at the Tie Rack where she got to sell to the Kansas City Royals players. She had also worked in the concession stand at the Royals Stadium. Marie was a member of the First Christian Church, Moberly, Missouri.

Besides her parents, she was preceded in death by a daughter, Donna S. Eaton on October 31, 2011; two brothers, Elbert and J.R. White and a sister, Marguerite Freeman.

Marie is survived by a granddaughter, Janet Eaton; two nieces, Nancy Ashline, Pamela Czech and husband Dennis and a nephew, Steven Freeman and his wife Shay all of Kansas City, Missouri; other relatives and friends.


Graveside services were held Friday, May 10, 2019 at the Oakland Cemetery, Moberly, Missouri.

The family suggest in lieu of flowers that memorial contributions may be made to Ascend Hospice and may be sent in care of Dickey Funeral Home, P.O. Box 432, Harrisonville, Missouri 64701.
To order memorial trees or send flowers to the family in memory of Marie White Wray, please visit our flower store.