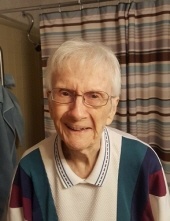 Marjorie Maxine (Wade) Irey of Harrisonville, Missouri was born September 21, 1927 in Hoxie Kansas. Daughter of Sarah Frances (Baxter) Wade and Bryan Wesley Wade she was the third child of 6. She left this world on January 21, 2022 while recovering from a hip fracture caused by a fall in her apartment at Carnegie Village in Belton MO.

At 94 she attained the same age as her husband George William Irey who passed away February 12, 2020. They were married March 25, 1946 in Kansas City Missouri.

Marjorie had many jobs over the years such as waitress in Leeds Missouri where she met the love of her life George, cafeteria worker in Kansas City Missouri and Belton schools, retail work at several different places including Tradex clothing store in Belton, Family Center In Harrisonville and the Hallmark store also in Harrisonville. In addition to those jobs she cleaned houses and volunteered at Meals on Wheels in Garden City Missouri.

As an active and long time member of First Christian Church of Garden City Missouri she enjoyed the sermons on Sunday and visiting with the other members.

Marjorie is survived by daughter Dena Gent of Kansas City, daughter Georgia Carpenter and husband Mike of Independence Missouri, Son Mike Irey and wife Vicki of Overland Park Kansas, 8 grandchildren and 17 great- grandchildren and the many other relatives and friends she made while attending church and working in her communities.

Marjorie was a women of many talents, sewing, quilting, embroidery, painting on canvas and wooden crafts, cooking, and gardening. She enjoyed taking a long walk which was her main mode of transportation to many of her jobs in Kansas City and Belton. Since the family only had one car, she didn’t learn to drive until she was 42.

Marjorie was a kind, generous, and warm hearted person who went the extra mile to take care of her family and friends. She will be missed by all of us but we are relieved that she is no longer suffering from the dreaded disease Alzheimer’s and physical pain. She can now enjoy time with her husband , parents and siblings in the life beyond. May you Rest In Peace. We will see you on the other side.

Memorial contributions may be made to Children's Mercy and may be sent in care of Dickey Funeral Home, P.O. Box 432, Harrisonville, Missouri 64701.
To order memorial trees or send flowers to the family in memory of Marjorie Maxine Irey, please visit our flower store.