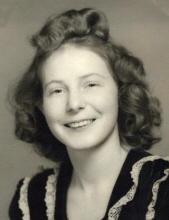 She was born Aug. 28, 1924, near Cureall in Howell County, the daughter of Stillman Harrison Garrett and Reva (Riley) Garrett.

During World War II, she left West Plains and moved to Kansas City where she worked at several jobs until she went to work as a waitress at Thompson’s Lunch at 31st and Troost. It was there she met the owner’s brother, William Lee “Bill” Thompson, and they were married Feb. 13, 1948.

Soon after their marriage, they moved to the farm near Pleasant Hill and she became the typical Cass County farm wife with gardening, canning and cooking meals for hired hands. She and Bill were involved in Balanced Farming and other agriculture-related organizations in Cass County. She was also involved as a member of Cass County Extension.

She was involved in PTA at Raymore and later at Pleasant Hill and was a 4-H mother. Bill was a beef project leader and her daughter, Linda, was a member of the Raymore 4-H Club. The family's love of the 4-H organization lasted a lifetime.

She was an accomplished seamstress, loved to hunt morel mushrooms and had a unique eye for antiques, amassing an impressive collection of antique furniture and other fine pieces.

After their retirement, she and Bill operated booths at various antique malls in the area including Greenwood, Peculiar and at Keeper’s Antique Mall in Harrisonville.

She was a member of the Pleasant Hill United Methodist Church.

She was preceded in death by her parents; her husband, who died Oct. 31, 2005; her brothers, Ira William and Billy Gene; her sisters, Justeen, Faye, Zella, Vinita and Helen Jane; and several nieces, nephews and other relatives.

Funeral services will be held 10:30 a.m. Wednesday, May 19, 2021, at the Stanley-Dickey Funeral Home. Reverend Mark Clifton will officiate. Burial will be in the Raymore Cemetery, Raymore.