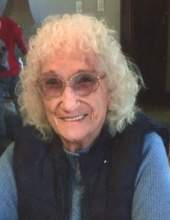 Martha Ellen (Nichols) Cole of Belton, Missouri was born December 1, 1928, in Leeton, Missouri the daughter of Jay Earl Nichols and Leta Ellen (Elliott-Nichols) Anders. She departed this life on Sunday, February 13, 2022, at her home in Belton at the age of 93 years, 2 months, and 13 days.

On October 8, 1943, Martha was united in marriage to William Homer Cole in Clinton, Missouri.

Martha was a homemaker through her 30’s then started a career at Peterson’s where she had retired. She was a member of the Eastern Stars in Belton, Missouri, and attended the First Baptist Church of Belton, Missouri. Martha enjoyed having family picnics with her sisters, children nieces, and nephews.

Memorial contributions may be made to St. Jude's.

To view video click on Tribute Wall.
To order memorial trees or send flowers to the family in memory of Martha E. Cole, please visit our flower store.