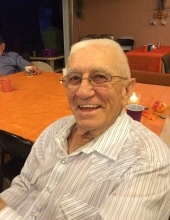 Marvin John Schick, Harrisonville, Missouri was born August 1, 1938 in Tampa, Kansas the son of John Henry and Lydia (Metzler) Schick. He departed this life on Tuesday, December 17, 2019 at his home at the age of 81 years, 4 months and 16 days.

On September 19, 1959, Marvin was united in marriage to Dorothy Mae Lawrence in Kansas City, Missouri.

Marvin was employed as a welder for several area companies. He enjoyed working in his shop and doing work on any kind of steel. Marvin enjoyed and looked forward to playing cards with his friend Sue Pippen.

Besides his parents, he was preceded in death by his wife, Dorothy Schick on December 15, 1996.


The family received friends Saturday, December 21, 2019 at the Dickey Funeral Home, Harrisonville, Missouri with cremation to follow the visitation.

Family suggests memorial contributions may be made to Ascend Hospice.
To order memorial trees or send flowers to the family in memory of Marvin John Schick, please visit our flower store.