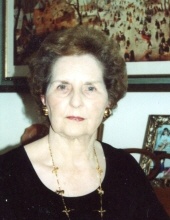 Mary Ann McDaniels, 87, Harrisonville, Missouri was born March 20, 1932 in Newton County, Arkansas the daughter of Layton and Edna (Hunter) Franks. She departed this life on Saturday, February 29, 2020 at Meadow View of Harrisonville.

She was united in marriage to Jerry Lee McDaniels.

Mary was employed as a teacher and was a graduate of Central Missouri State University in Warrensburg, Missouri.

Besides her parents, she was preceded in death by her husband, Jerry Lee McDaniels on February 1, 2014 and two brothers.

Mary is survived by relatives and friends.

A private burial will be held at the Decatur City Cemetery in Decatur, Arkansas.

Funeral arrangements under the direction of the Dickey Funeral Home, Harrisonville, Missouri.
To order memorial trees or send flowers to the family in memory of Mary A McDaniels, please visit our flower store.