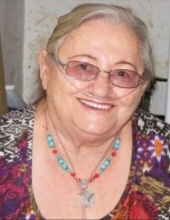 Mary Francine Bryant of Longton, Kansas formerly of the Dayton Community near Garden City, Missouri was born June 14, 1939 in Dayton, Missouri the daughter of Loren Estel and Helen Fay (Yeates) Kimberlin. Mary was the 5th. generation of the Kimberlin's in Cass County, Missouri area. Her great-great grandfather, Joseph Kimberlin was one of the original founders of Dayton. She departed this life on Friday, February 5, 2021 at Sedan City Hospital, Sedan, Kansas at the age of 81 years, 7 months and 22 days.

Mary owned and operated the Dayton Short Stop for several years. Mary's many adventures included traveling from the East to West coast. She enjoyed camping with her family, fishing and hunting with her grandsons. Mary enjoyed bird watching and had a kind heart for all of God's creatures. When Mary wasn't enjoying the wonders of nature, she was an avid reader.

Mary was led to salvation by a stranger on the water's edge of the Atlantic Ocean outside of Port St. Lucie, Florida on January 18, 2013.

Besides her parents, Mary was preceded in death by her soul mate, John B. Jackson (JB) on June 4, 2011, a sister, Loraine, two brothers, Virgil and Wendell Kimberlin.

A Celebration of Life Service will be held at a later date in June 2021.
To order memorial trees or send flowers to the family in memory of Mary Francine Bryant, please visit our flower store.