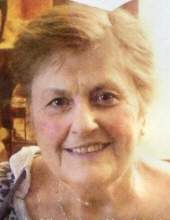 Mary is survived by her husband, Harry L. Yoder, of the home. Harry and Mary celebrated 59 years of marriage in 2021. In addition to Harry, Mary is survived by two daughters, Terri Lynn Yoder (Robert C. Wollenberg) of Peculiar, Missouri, and Cindy Lu Yoder of Kansas City, Missouri; three sisters, Audrey Howe of Pleasant Hill, Missouri, Lou Yates of Buckner, Missouri, and Wendy Peirce of Pleasant Hill, Missouri; two grandchildren, Sean and Elise; and four great-grandchildren, Emma, Kai, Wallace, and Kota; many nieces and nephews and grandnieces and grandnephews, and other relatives and many friends.

Mary was preceded in death by two brothers, Russ Magill and Bill Magill.

Mary was born in 1945 to Nathan and Grace Magill in Seattle, Washington. After completing her sophomore year of high school in Kingsville, Missouri, Mary received the Best All Around Student award for that school year. Mary was also an accomplished basketball player on the Kingsville High School basketball team. Mary drove a school bus for the Harrisonville, Missouri, school district for many years, and she also drove buses for extracurricular activities and delivered school buses to various locations during the summertime. Mary was then employed as records manager by Waddell & Reed in Kansas City, Missouri. Finally, Mary worked as an assistant buyer for the Family Center (Farm and Home) in Harrisonville, Missouri, until her retirement in 2015 where she made many lasting friendships.

In addition to playing basketball in high school, Mary spent many years playing volleyball and fast-pitch softball with her very competitive friends who enjoyed celebrating their success. Mary was a “coach’s wife” and was very engaged in Harrisonville athletics and the well-being and success of the athletes and other students attending Harrisonville schools.

Mary enjoyed listening to live music and supporting local bands around the Kansas City area, whether at Knuckleheads, BB’s Lawnside BBQ, the Grand Emporium, or Harlings. She also enjoyed catching major artists at various venues throughout the city. Mary attended many music festivals with Harry, such as the King Biscuit Blues Festival, the Rentiesville Dusk ‘Til Dawn Blues Festival, the Chicago Blues Festival, and the Kansas City Blues & Jazz Festival. Mary and Harry travelled from Beale Street to Bourbon Street to the Redneck Riviera in Panama City Beach catching beaches and blues along the way. Mary was frequently lucky with the one-arm bandits while traveling on their many adventures. Mary enjoyed spending time with her friends and family camping, canoeing, and telling lies along the river and around the campfire.

Mary Yoder has been described in many ways, but by all accounts, she was a force of nature; a fun-loving tough-ole-bird who always let you know where you stood and that she loved you regardless; one of a kind who would stand up and support you if and when needed; fun but no nonsense; cool and friendly; supportive, pragmatic, and bigger than life. Mary never met a stranger. She loved everyone, and everyone loved her. Mary had a beautiful soul. Her joy for life was unmistakable as you could see in the mischievous twinkle in her eye. She was gregarious, outspoken, ornery, and filled to the brim with love. While Mary will be sorely missed, the memories Mary’s friends and family share will continue to uplift them and her spirit will live on in all who loved her.

A Celebration of Life Visitation will be held Saturday, March 12, 2022, from 2 p.m. to 4 p.m. at the Dickey Funeral Home, Harrisonville, Missouri. Following the service, the Celebration will continue at Fugly’s Bar and Grill in East Lynne, Missouri.

The family suggests that memorial contributions may be made to the Mary Yoder Athletic Fund and may be sent in care of the Dickey Funeral Home, P.O. Box 432, Harrisonville, Missouri 64701.
To order memorial trees or send flowers to the family in memory of Mary Virginia Yoder, please visit our flower store.