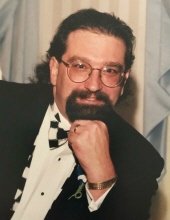 Matthew Forest Feeback of Lee’s Summit passed away August 3, 2019 at his home.

He was born January 25, 1963 in Warrensburg Missouri, the son of Don and Helen Feeback.

Matthew was a graduate of Missouri Valley College. He enjoyed golf, fly fishing, watching the Kansas City Chiefs, and spending time with his pets.

He was preceded in death by his father, Don Feeback and a cousin, Steve Hon.

Cremation. A private family inurnment will be held at the Rose Hill Cemetery near Latour, Missouri at a later date.

Funeral arrangements are under the direction of the Dickey Funeral Home, Harrisonville, MO.
To order memorial trees or send flowers to the family in memory of Matthew F. Feeback, please visit our flower store.