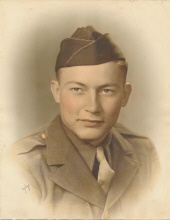 He graduated with a High School Diploma in 1939 from Lone Jack High School, Lone Jack, Missouri. In 1941, while attending Central Missouri State Teacher's College, he obtained a pilots license. [On Sunday 7 December 1941 the Japanese bombed Pearl Harbor killing 2335 service men and 68 civilians.] He graduated with a Bachelor of Science Degree with a major in chemistry and a minor in physics in 1942 from Central Missouri State Teacher's College, Warrensburg, Missouri.

Max began military service on 20 October 1942 in Fort Leavensworth, Kansas. He had additional education in advanced chemical engineering during 1943 from the University of Santa Clara, Santa Clara, California. RMS Aquatania was used as a troop transport during WWI and WWII. She took Max from New York to Scotland March 12-21, 1944. D-Day landings began on 6 June 1944. He crossed within the first 30 days and was thus in the Invasion of Normandy. He did not sleep inside a building for over a year. He served as a medical NCO. [8 May 1945 was Victory in Europe Day and 2 September 1945 was Victory over Japan Day.] His military service ended on 12 December 1945 in Indiantown Gap Military Reservation, Pennsylvania. He was honorably discharged as a staff sergeant of the Headquarters Detachment 89th Replacement Battalion. He received a bronze star among other metals, ribbons, and badges.

Max enjoyed trap & skeet shooting, fishing, and hunting. His hunting ranged from quails and pheasants to deer, elk, and moose. He also enjoyed gardening and was in a garden club. He was a Mason.

He enjoyed flying. In the 1950's he purchased an Aronka Champ. In October 1975 he bought a Cherokee which he flew for 15 years. He retired in 1982 from Wilson Meat Packing Company. For many years he worked out of their Chicago headquarters as a sausage and canned meats troubleshooter. He retired as a Plant Quality Assurance Manager after working 37 years for them.

Max was preceded in death by his sisters, Maxine Carlyle and Eileen Planck. He is survived by his niece, Gayla Wynn, his nephews, Nevin Carlyle and Clifford Planck, and three more generations of nieces & nephews. He never married.

Max was at home asleep when he went peacefully to be with our Lord and Savior, Jesus Christ, in the wee hours of Monday morning, 25 October 2021, at the age of 100.

Funeral arrangements are under the direction of the Dickey Funeral Home, Harrisonville, Missouri.
To order memorial trees or send flowers to the family in memory of Max E. Brown, please visit our flower store.