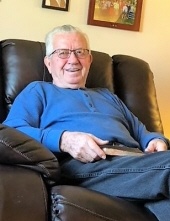 Melford Francis “Frank” Ash, 85, of Raymore, Missouri, was born July 7, 1935, on the family farm in Sweet Water, Missouri, the son of Melford T. and Mable A. (Cline) Ash-Keeton. He went to meet his Heavenly Father on Thursday, June 17, 2021, at his home surrounded with love and family.

Melford was the fifth of twelve children. At the age of nine he made the grand decision to obey the Gospel of Christ and was baptized into the Church of Christ where he was a faithful member and Elder for the remainder of his life.

In May of 1959, his world changed as he met and fell in love with his future wife Wilma Lorene Retherford. They were united in marriage on November 20, 1959, and soon started a family raising four children. His love for Wilma was unquestionable; he may have teased her a bit, but his love for her was without end.

Melford was employed as a truck driver for the Graves and Hyman truck lines for 37 years and was a member of the Teamsters Union Local #41. He retired in 1994 and never sat still. He filled his days, lending a hand to anyone who needed help with a remodel, handyman work, or even building a new home.

He was an avid outdoorsman. He loved fishing and hunting with his brothers, son, sons-in-law, and grandsons. He also enjoyed coon hunting, bee keeping, gardening and mushroom hunting. He also loved to throw horse shoes and in the early 1950’s he competed in the grand championship at the Missouri State Fair. Most of all he loved gospel music. He loved to sing and beat time with his hand.

He is survived by his wife of 61 years, Wilma of the home; one son, Lloyd Ash of Raymore; three daughters, LaDonna (and Randy) Garrison of Pleasant Hill, LaVonna (and Gene) Malott of Blue Springs, and LaRonda (and Kevin) Catanzaro of Clinton; grandchildren, Adam, Matthew, Rachael (and Brad), Rebecca (and Zach), Derek, Tony (and Tori), Jessica, Atean (and Nicole), Chayton, Rachael, and Hunter; great grandchildren Haley, Trent, Brent, Morgan, Deegan, Kennedy, Iva, Leeann, Audra, Reed, Shinia, Amara, Neena, and Baby Willis; brothers, Arnold (and Linda) Ash and Bill (and Nancy) Keeton both of Tonasket, Washington; sisters, Margie (and Bob) Weaver of Warsaw, and Anna Hamerick of Odessa; numerous nieces and nephews; other relative and a host of many church friends.

Memorial contributions are suggested to the Alzheimer’s Awareness Association or St. Croix Hospice and may be sent in care of the funeral home.

(816) 540-5550
To order memorial trees or send flowers to the family in memory of Melford Ash, please visit our flower store.