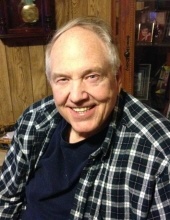 Melvin “David” Smith of Paola, Kansas was born March 16, 1943 in Neosho, Missouri the son of Raleigh Wright and Lucille Faye (Thompson) Smith. He departed this life on Sunday, April 12, 2020 at his home at the age of 77 years and 27 days.

On June 23, 1969, David was united in marriage to Linda Carol Davidson in Kansas City, Kansas.

David was employed as Maintenance Director for Dickinson Theaters in Merriam, Kansas until his retirement in 2005. He was a lifetime member of the International Association of Stage & Theatre Employees Locals #496 and #31. He was an Army veteran of the Vietnam War receiving the Bronze Service Star, National Defense Service Medal and Republic of Vietnam Campaign Medal. David was an avid model train collector and loved real trains. He was a movie buff and had an old movie projector theater in his basement.

Besides his parents, he was preceded in death by a granddaughter, Rachel Smith.

Family suggests memorial contributions may be made to the American Diabetes Association.

Funeral arrangements are under the direction of the Dickey Funeral Home, Harrisonville, Missouri.
To order memorial trees or send flowers to the family in memory of Melvin "David" Smith, please visit our flower store.