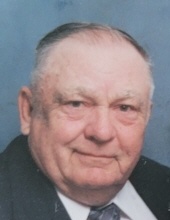 Melvin Lewis Hunziker (86) passed away on June10, 2022 at Golden Years Nursing Home in Harrisonville, MO due to heart failure.

Lewis, as he was known by everyone, was born August 8, 1935 at Fairfield, MO. He was the first born son of Buel and Marquerite Oryne (Breshears) Hunziker. Lewis was raised on a family farm in Avery, MO.

Lewis and Shirley Arlene Hicks met by chance leaving the Swope Park in Kansas City, MO. After three months of dating, Lewis and Shirley married on September 7, 1956. They had a daughter, Arlene Sue, born September 14, 1957, and son, Mark Lewis, born May 10, 1960.

On June 7, 1963 they bought and moved to a farm in Creighton, MO. Lewis farmed, raising hogs and cattle with the help of Shirley. He commuted 50 miles to GM daily while living at the farm, seldom missing a day. He continued raising cattle after his retirement from GM.

Lewis also had his own trucking business after retirement. Later his son, Mark, took over driving a flat bed for the business. When fuel and insurance got so high they dissolved the business.

Lewis came down with diabetes after he stopped trucking. He liked to keep busy until a heart attack on October 7, 2003 slowed him down. At that time he quit smoking after 50 years! He had a second almost fatal heart attack October 10, 2015. He never got his strength back after that. A pacemaker was put in in 2016.

Lewis and Shirley always enjoyed gardening even teaching their grandaughter, Kristi. Lewis was always ready to help a neighbor or friend. He didn’t take many vacations because of the farm and he didn’t care to go anywhere.

Lewis was fond of his border collie dogs of which he had many over the years. He began naming them all Boots! They helped him with the cattle along with his four wheeler. He also had a couple cats during his life on the farm he was fond of.

Lewis was a “Ford” person as most people knew. Later he did buy a Dodge after he thought they had improved. He was a stubborn man, once he got something in his head it was hard to change it!

It was no secret that Lewis could not tolerate onions or garlic in his food or on anyone’s breath. He would hardly eat at a restaurant for fear of smelling onions in the air. He also did not like sports.

Surviving Lewis is his wife of 65 years, Shirley, his daughter, Arlene Maury, his son Mark and wife Loretta, his brother, Lelan and wife Kay; brother in law, Bob Hendricks, his youngest sister, Linda Fry, his granddaughter, Kristi Hunziker with fiance Michael Reisinger, his grandson Jason Mauery, his grandson Shawn and wife Jena Mauery, his great grandson, Parker Mauery, and another great grandson on the way. He also had step grandchildren David Wright, Joseph and wife Cherokee Wright, Kayla and husband Elijah Wolfe, and Matthew Wright; along with six step great grandchildren. Lastly, he had several nieces and nephews.

Visitation will be Tuesday June 14, 2022 from 9:30 to 10:30 a.m. at Dickey Funeral Home in Harrisonville, MO., with funeral services following. Graveside services will follow at 2:30 p.m. at the Spring Branch Cemetery in Avery, MO., where his family is buried.

To order memorial trees or send flowers to the family in memory of Melvin Lewis Hunziker, please visit our flower store.