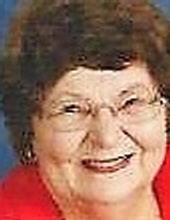 In 1944, Nadine was united in marriage to Jackson Dennis Villines in Kansas City, Missouri and to this union one child, Jackie Dean, was born two years later. Their teenage marriage did not last; they later divorced. Mr. Villines is deceased.

In 1951, she was united in marriage to Ples C. Thurman in Independence, Missouri. In 1956 they purchased a farm near Harrisonville. They were married over 10 years until he passed in January 1962.

In 1963, Nadine was united in marriage to Boone Ingels, Jr., a widower, and he brought with him two children, Mary Katherine and Richard Boone Ingels. Nadine stood dutifully by Boone until his in death in 2004.

Nadine graduated from the National School (near Warsaw, Mo.). Leaving Benton County, she finalized her education in Kansas City. She graduated from Sequin’s School of Charm and later the Moller College of Cosmetology. She also attended special classes at Kansas University for business administration and styling. She then went to work for Macy’s department store in downtown Kansas City as a Hair Stylist and Color Technician. Later she owned and operated her own salon, Nadine’s Style House in Harrisonville and later in Pleasant Hill.

Although she was a hair stylist by trade, her favorite “job” was working side by side with Boone on their farm “Ingelside” just outside of Pleasant Hill. Boone and Nadine loved children, and many former Pleasant Hill students will remember the annual kindergarten field trip to Ingelside for sheep shearing, butter making, cow milking, and learning about the automatic feeding system. The trip ended with homemade cookies and milk. She loved to cook, bake, decorate, and entertain at Ingelside. It was a gathering place for many neighbors, friends, clubs and organizations.

Many will remember that every Christmas she shared her faith by displaying the nativity scene and hanging a star on the silo 70 feet off the ground. The story of the nativity was staged all across Ingelside with shepherds in the pasture, an angel, the wisemen approaching from the East, and the stable with Joseph, Mary, and Jesus along the drive.

Nadine established a scholarship fund at the St. Paul School of Theology in Kansas City for aspiring ministers. She was an active supporter of the Fellowship of Christians and Jews; adopting several people through the Wings of Eagles program which helped return Jews back to Israel. She was an active member of the Pleasant Hill United Methodist Church where she was involved in many aspects of the church including the United Methodist Women receiving her lifetime membership pin. As a member of the Altar Guild, sheused her giftin flower arranging to provide flowers for Sunday worships, wedding arrangements, the annual Harvest dinner and numerous other church functions for manyyears. Oftentimes, following services, she would break those arrangements down and take them to various nursing homes in the area to extend love to those residents.

Voters in Big Creek Precinct #24 elected both Boone and Nadine as their democratic representative to serve on the Cass County Central Democratic Committee. They were both reelected and served many years (one year she even received more votes than Boone, but he never admitted it).

Memorial contributions are suggested to Gideon’s International Cass County Camp or the Pleasant Hill United Methodist Church and may be sent in care of the funeral home.