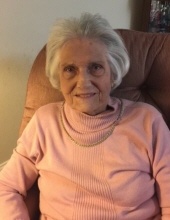 Opal Nadine (Vandiver) Fortner of Harrisonville, Missouri was born April 21, 1928 in Everett, Missouri the daughter of Raymond and Margaret Elizabeth (Luckeman) Hocker. She departed this life on Saturday, January 23, 2021 at Research Medical Center, Kansas City, Missouri surrounded by love and family at the age of 92 years, 9 months and 2 days.

On June 5, 1944 Nadine was united in marriage to Lee E. Fortner in Paola, Kansas and later married Charles Vandiver.

Nadine was a homemaker. She also was employed as a cook for the Cass Medical Center, Harrisonville, Missouri and at several local nursing homes. Earlier she was a seamstress for the Betty Rose Garment Company, Belton, Missouri. Nadine was a member of the Adrian Christian Church, Adrian, Missouri. She enjoyed being with her family, gardening, sewing, quilting, was a great cook and a very hard worker. Nadine had lived in Everett and Archie, Missouri before moving to Harrisonville, Missouri.

Besides her parents, Nadine was preceded in death by her first husband, Lee on February 10, 1990; her second husband, Charles on December 25, 2013; three brothers, Harold, Glenn and Joe.

Graveside services will be held Thursday, January 28, 2021 at 2:00 p.m. at the Freeman Cemetery, Freeman, Missouri.

Due to COVID-19 mask and social distancing is required while attending services.

The family suggest that memorial contributions may be made to the First Christian Church Memorial Fund, Harrisonville, Missouri and may be sent in care of the Dickey Funeral Home, P.O. Box 432, Harrisonville, Missouri 64701.
To order memorial trees or send flowers to the family in memory of Nadine (Vandiver) Fortner, please visit our flower store.