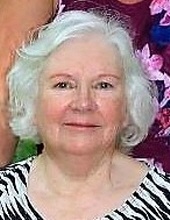 Ann was a 1960 graduate of Center High School in Kansas City, Missouri.

Ann was employed as an accountant for the United States Department of Agriculture retiring in December 2005. She enjoyed sewing, quilting, photography, crafting, painting, camping and fishing. She also loved to read and write and tell stories of her life. She most enjoyed spending time with her family.

She is survived by her daughter and son-in-law, Lorrie and Michael Webster of Belton; three grandchildren, Austin (and Mercedes) Webster of Spring Hill, Kansas, Murrissa Webster and Savannah Webster, both of Belton; five great grandchildren, Keller, Mylee, Kaydence, Brantley, and Beckett; one brother, Charles (and Frankie) Graham of Weston, Missouri; one sister, Norma Jones of Raymore, Missouri; other relatives and friends.