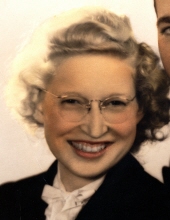 Neomi Maxine Brown was born July 27, 1922 in Daviess Co, MO to Lena Thelma (Moulin) and Niel Clifford Brown. Her siblings are Max Earl Brown, Holden, MO and Betty Eileen Planck, Tuscon, AZ. She was a 1940 graduate of Lone Jack, MO High School where she was the valedictorian. She later attended Central Business College, Sedalia, MO, and graduated with a Secretarial Certificate in 1941.

Maxine was baptized in 1933 with the Baptist Church of Lone Jack, MO.
During World War II, she resolved to help her country however she could and went to work at Lake City Arsenal almost immediately, her first day was on January 1, 1942. Her father learned of a group of learned of a group carpooling to work there, and arranged for her to be picked up.

That morning of New Year’s Day she got in the back seat of the car next to Keith Hill Carlyle, they were married on Mother's Day, May 9, 1943. at the Baptist Church of Lone Jack, MO.

They moved to the Medford area in March 1946. Gayla Rea Carlyle was born to them in May of 1946. They became members of Rose Hill Baptist Church in 1948. She was an active member working in Bible School, teaching Sunday School, secretary of the Sunday School, and church treasurer for many years, as Keith was an active deacon. She became a charter member of 4-M's Extension Club in Medford. On Jan 26, 1953, Niel Thomas Carlyle was born to them, though he was only alive hours he was forever remembered. Nevin Keith Carlyle was born in March of 1954.

She became a member of Elizabeth Randolph Chapter, NSDAR, on Oct 18, 1963, where she was a regent for 8 years. She was an excellent seamtress often making clothing for her children and grandchildren, and she made quilts for many years for friends, family, and charity. She was an avid gardener with over 200 named varieties of iris, and she enjoyed china painting for many years. She was preceded by her husband, Keith on April 29, 1993.

Maxine was with her family when she went peacefully to be with our Lord on Friday afternoon, 31 August 2018, at age 96.

Cremation. A Celebration Of Life Service was held Wednesday, September 5, 2018 at the Rose Hill Missionary Southern Baptist Church, Garden City, Missouri. Graveside and inurnment will be at a later date.
To order memorial trees or send flowers to the family in memory of Neomi M. Carlyle, please visit our flower store.