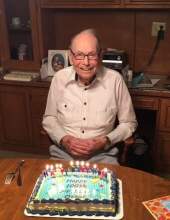 Otto Clifton Downey of Independence Missouri was born on May 19, 1918 in Archie, Missouri to the late Marion and Virgie (Gann) Downey. He departed this life on Saturday, June 16, 2018 at his home surrounded by his son and immediate family. He celebrated his 100th birthday last month.

Otto lived most of his early life in Bates & Cass County. He served in the army. He married Frances Margaret Rutt in 1946 and they had one son Randy Clifton Downey. He later worked for Bendix, where he retired in 1980.

He was proceeded in death by his parents Marion and Virgie Downey, his wife Frances Downey, his brothers Kenneth and Jack Downey.

Funeral services will be held Thursday, June 21, 2018 at 2:00 p.m. at the Dickey Funeral Home, Harrisonville, Missouri with burial in the Garden City Cemetery, Garden City, Missouri.

The family will receive friends Thursday, June 21, 2018 from 1:00 p.m. - 2:00 p.m. at the funeral home.
To order memorial trees or send flowers to the family in memory of Otto C. Downey, please visit our flower store.