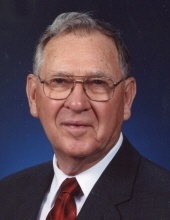 Paul Ezra Raines of Garden City, Missouri was born July 28, 1922 in Proctor, Missouri the son of William Lewis and Nettie Mae (Chamberlain) Raines. He departed this life on Friday, November 8, 2019 at the Missouri Veterans Home, Cameron, Missouri at the age of 97 years, 3 months and 11 days.

On August 13, 1955, Paul was united in marriage to Dorothy Emma Johnson in Kansas City, Missouri and later to Mary Maxine (Jones) Brown on July 1, 1989 in Creighton, Missouri.

Paul was employed as a Precision Assembler for Allied Signal, Kansas City, Missouri until his retirement in 1988. He was a member of the Trinity Lutheran Church, Creighton since 1957 and an Army Air Corps veteran of World War II. Paul enjoyed traveling, bowling and was a licensed pilot.

Besides his parents, he was preceded in death by his first wife, Dorothy Raines on October 29, 1984; 8 brothers and sisters.


Funeral services will be held 10:00 a.m., Thursday, November 14, 2019 at the Trinity Lutheran Church, Creighton, Missouri with burial in the Crescent Hill Cemetery near Adrian, Missouri.

In lieu of flowers, family suggests memorial contributions may be made to the Trinity Lutheran Church Memorial Fund.

Funeral arrangements are under the direction of the Dickey Funeral Home, Garden City, Missouri.
To order memorial trees or send flowers to the family in memory of Paul E. Raines, please visit our flower store.