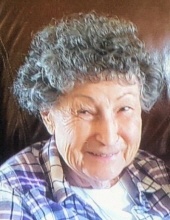 Peggy was employed at St. Luke's Hospital, Kansas City, Missouri in patient billing until her retirement in 2011. She was a member of Heartland Baptist Fellowship, Harrisonville, Missouri. Peggy enjoyed her family, especially her grandchildren, traveling, taking cruises and shopping. She had lived in Harrisonville before moving to Excelsior Springs, Missouri in 2015.

Besides her parents, Peggy was preceded in death by her daughter, Valerie Kassen on June 21, 2010; a grandson, Clint Staggs; two brothers and six sisters.

The family suggest in lieu of flowers memorial contributions may be made to the Alzheimer's Association.
To order memorial trees or send flowers to the family in memory of Peggy Jo Rick, please visit our flower store.