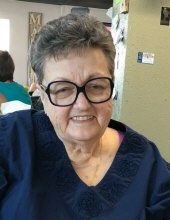 Phyllis often referred to herself as a domestic engineer, although there were odd jobs along the way. Her primary focus was always Claude. In 1993, Phyllis and Claude bought an RV and traveled the country – seeing the sights, visiting friends and family, and enjoying each other’s company. Working winter’s at Disney World, Phyllis and Claude were the ultimate hosts – tour guides, shuttle drivers, free park entry, and dinner companions. Together, they visited all 50 states and Washington DC. They drove through Canada and then wandered south to Mexico. Having conquered North America, they visited and drove through Europe – Germany, England, Italy, France and Switzerland.

Phyllis is preceded in death by the love of her life and husband of 62 years, Claude. She was also preceded by her brother, Kenneth Clyde Brown, and her grandson, Justin Carl Barnes.

She leaves behind her six children: three sons, Kent, Mark and Carl Barnes, all of Lee’s Summit, MO; her daughter and son-in-law, Sona and Bruce Harbrucker of Saddlebrooke; MO, her daughter Rona Ryan of Euless, TX; and her daughter and son-in-law, Dawn and Jim Ehlinger of Justin, TX. In addition, she leaves behind 11 living grandchildren; 12 great grandchildren; and 2 great, great grandchildren.
.
Cremation. A Celebration of Life Service was held Saturday, September 29, 2018 at the Dickey Funeral Home, Harrisonville, Missouri with inurnment in the Brown Cemetery, Oak Grove, Missouri.

Family received friends from Saturday, September 29, 2018 at the funeral home.
To order memorial trees or send flowers to the family in memory of Phyllis J. Barnes, please visit our flower store.