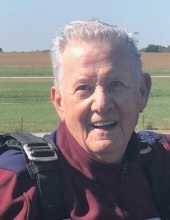 Ralph LeRoy (Lover) Fidler Sr. of Harrisonville was born October 17, 1936 in Kansas City, MO the son of Ralph E. Fidler and Josephine M. (Walker) Fidler. Ralph departed this life, Monday November 30, 2020 at his home surrounded by the love of his family.

Ralph enjoyed life to the fullest. In 1969, he bowled a perfect 300 game as his family watched him on TV receiving trophies, 300 diamond ring and cash. He also enjoyed hunting, fishing, trap shooting, playing golf, and most of all coaching his grandson’s John & Anthony’s baseball team. For several years he also enjoyed helping his son, Ralph in the hay fields. Ralph and Patsy enjoyed spending summer time with Anthony & John taking trips to the lake and Branson. Later in life they took their two great grand kids, Camryn & Cole Purtle on summer fun trips too. Ralph also loved making wine and got very good at it. Once he set his mind to do something, he never stopped till he mastered it! One of Ralph’s other hobbies was electrical. He was always ready to help someone to wire a house or just run a light. He truly enjoyed helping people.

After 30 years at GM, he retired and started a small engine repair at home, and enjoyed living on their farm, spending time with his family and many friends. Ralph, along with Patsy, enjoyed volunteering at Golden Valley Hospital in Clinton, MO where they volunteered for several years.

Ralph attended the First Baptist church of Creighton, and enjoyed his involvement and taking his great-grand kids Camryn & Cole for bible school every summer. He really loved his church family.

After 43 years of farm life, they decided to move to Harrisonville where they begin traveling, taking cruises to Panama Canal, Hawaii, to the New England States and into Canada. Not to mention many road trips and spending lots of time in Branson with their Daughter Tracye and Artie. They took a trip last year to Florida with their grandson Anthony and his daughter Skylar.

On October 13, 2019, he completed his bucket list. He went skydiving in Clinton, MO at 83 years young and aced it! He had the time of his life too! One of Ralph’s proudest moments is being married to the love of his life (Shorty) for 64 years.

The family suggest that memorial contributions may be made to ALS Foundation or to the American Cancer Society.
To order memorial trees or send flowers to the family in memory of Ralph LeRoy Fidler Sr., please visit our flower store.