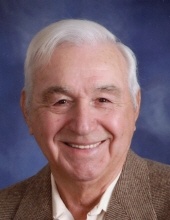 Ralph was born on January 12, 1934 and grew up in Rich Hill, Missouri. He was the second youngest child of Mabel Kile Bear and Alfred Bear. After graduating from Rich Hill High School, he married Shirley Scism. They moved to Shawnee, Kansas, where Ralph got a job driving a truck for Food Barn Stores. They found a run-down farm in Shawnee, and proceeded to fix up the house to accommodate their growing family. God blessed their marriage with three children: Steve, Randy and Tondya.

During much of his early married life, Ralph worked two jobs – driving a truck at night, and selling real estate with Eugene D. Brown during the day. He was an auctioneer and licensed broker in Kansas, Missouri, Oklahoma and Nebraska, and specialized in selling large farms.
Ralph’s hobby of raising exotic animals eventually evolved into a thriving miniature horse business. He and Shirley sold horses throughout the United States, and traveled extensively showing their horses.

After residing 60+ years in Shawnee, Ralph and Shirley moved to Harrisonville, Missouri. They found their current home, situated on 15 acres, and enjoyed several years there together.

Throughout his life, Ralph was a devoted Christian. He was instrumental in founding Greenwood Baptist Church in western Shawnee, Kansas, and later became a member of Lenexa Baptist Church. In Harrisonville, he found his final church home at Antioch Southern Baptist Church. He was an inspiration to friends and family, and though we will miss him dearly, we derive comfort knowing he has gone to be with the Lord.

Ralph was preceded in death by his parents, four sisters, two brothers and one grandson.

Cremation. Visitation will be 12:00 pm until 1:00 pm on Thursday, October 18, 2018 at the Antioch Southern Baptist Church, Harrisonville, Missouri.