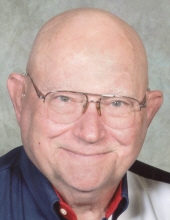 Raymond Irl Swalley of Garden City, Missouri was born October 31, 1933 in Pickering, Missouri the son of Burleigh Oakwell and Nina Veturia (Lamport) Swalley. He departed this life on Wednesday, September 12, 2018 at Golden Years Care Services, Harrisonville, Missouri at the age of 84 years, 10 months and 12 days.

On November 13, 1963 Raymond was united in marriage to Iva Jean Burgess in Independence, Missouri.

Raymond was employed as a machine operator for Lake City Army Ammunition Plant, Independence, Missouri until his retirement. He attended Dayton Community Church, Garden City, Missouri. Raymond enjoyed conversation with his friends while drinking coffee at Old Cedar Inn in Garden City. The past several years, Raymond and Jean became “snow birds’ and enjoyed spending the winter months in Texas. He had lived in Independence before moving to Garden City.

Besides his parents, Raymond was preceded in death by three sons, Raymond, Ronald and David; his daughter, Rita Freeman.

Raymond is survived by his wife, Jean Swalley of the home; a son Dean Swalley, Warsaw, Missouri; a daughter, Diane Ruffy, Desert Springs, California; other relatives and a host of friends.

Funeral arrangements are under the direction of the Dickey Funeral Home, Garden City, Missouri.
To order memorial trees or send flowers to the family in memory of Raymond I. Swalley, please visit our flower store.