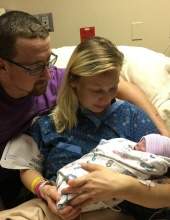 It is with great sadness that we announce the passing of our infant son, Reign Kinchen Harter, September 22, 2019.

Visitation was held Saturday, October 5, 2019 at the church.

A graveside service was held Saturday, October 5, 2019 at the Orient Cemetery in Harrisonville, Missouri.

In lieu of flowers, donations may be made to Journey Church International (in the memo box please write “Reign Harter Memorial Fund”).

Funeral arrangements are under the direction of the Dickey Funeral Home, Harrisonville, Missouri.
To order memorial trees or send flowers to the family in memory of Reign Kinchen Harter, please visit our flower store.