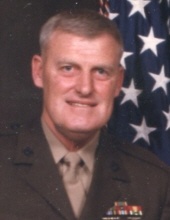 Thomas George Wright, of Garden City, Missouri was born April 30, 1943 the son of George and Inez (Waldschmidt) Wright Brant in Iowa City, Iowa. He departed this life on Saturday, June 16, 2018 at the Pleasant Hill Health and Rehab at the age of 75 years, 1 month and 16 days.

Thomas graduated from Iowa City High School in 1962. He served 30 years in the U.S. Marine Corps from 1963-1993, retiring as Master Gunnery Sergeant. He was always a hard worker and followed this with 18 years at the Wal-Mart in Harrisonville, Missouri until his retirement in 2011.

Thomas married Susan Bergeron in 1966 in San Diego, California and they later divorced. In October of 1992, he married Pauline Lois (Greenwood) Murray.

Besides his parents, he was preceded in death by his stepfather, Elmer Brant and a niece, Deborah Matthes.

Thomas is survived by his wife, Pauline; his daughters, Christine and Cynthia of California; a stepson, Kevin Murray and wife Cindy of Florida; a sister, Pat Matthes and husband Tom, Marion, Iowa; a nephew, Darren Matthes and wife Cindy of South Dakota; two great-nieces, Maren and Kate Matthes of South Dakota; three stepsisters; a stepbrother; many cousins and friends.