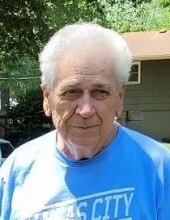 Ret. US Air Force TSGT Robert Douglas Lee of Harrisonville, Missouri was born May 11, 1936 in Lepanto, Arkansas the son of Robert Douglas Sr. and Flora (Cummings) Lee. He departed this life on Thursday, December 9, 2021 at the St. Luke’s East Hospital, Lee’s Summit, Missouri at the age of 85 years, 6 months and 28 days.

On February 3, 1961, Robert was united in marriage to Nina Lorea Oringderff in Harrisonville, Missouri.

Cremation. A Celebration of Life Service will be 11:00 a.m., Monday, December 13, 2021 at the Dickey Funeral Home, Harrisonville, Missouri with Military Honors to follow.

Family will receive friends from 10:00 a.m. until 11:00 a.m., Monday, December 13, 2021 at the funeral home.
To order memorial trees or send flowers to the family in memory of Ret US Air Force TSGT Robert Douglas Lee, please visit our flower store.