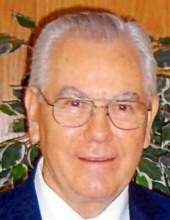 Dean was a 1945 Bolivar High School graduate. Before the end of World War II, Dean attended the University of Missouri. Shortly after enrolling at the University, the Navy called and he continued his education while serving in the Navy. It was during his time in the Navy that he answered God’s call for full-time service. Following his marriage to Cleo he began preparing his ministry by attending the Denver Bible Institute.

In 1952 he and Cleo along with two young children embarked on his life of service to the Lord. They began their missionary work in Africa. They spent 20 years spreading the good news to the people of Central Africa. In 1971 they returned to the states and joined the Carver Bible Institute in Kansas City where he served for over 48 years. He was still teaching there until just before he died.

His lifelong passion for studying and sharing the bible helped him touch many lives over three continents.

Dean was preceded in death by his parents and his first wife Cleo.

He is survived by his wife, Nancy of Lee’s Summit; five children, Vickie (and Bruce) R. Cady of Waco, Texas, Tim D. (and Toni) Chasteen, of Jackson, Missouri, Darryl R. (and Cheryl) Chasteen of Texarkana, Texas, Terry L. (and Susan) Chasteen of Olathe, Kansas, and Cathy L. (and Houston) Sears of Mt. Pleasant, Iowa; stepchildren; 14 grandchildren; 37 great grandchildren; other relatives; and a host of many friends.

Visitation will be held from 9:00 a.m. until service time at the church on Saturday.

Memorial contributions are suggested to the Ministry of Carver Baptist Bible College or the Lee’s Summit Bible Church and may be sent in care of the funeral home.