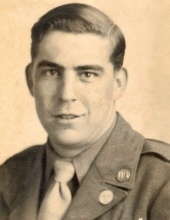 Perry Richard Ayler of Garden City, Missouri was born January 3, 1928 in Kingsville, Missouri the son of John Henry Sr. and Lola May (Clapper) Ayler. He departed this life on Friday, October 12, 2018 at the Golden Years Care Services, Harrisonville, Missouri at the age of 90 years, 9 months and 9 days.

On December 21, 1949, Richard was united in marriage to Dorothy Pearl Cowan in Holden, Missouri.

Richard was a farmer and stockman. He was an Army veteran.
Richard loved the great outdoors, whether it was hunting, fishing, trapping or as simple as going for a walk to check cows or a newly planted field. He was a family man and always made time for his kids and taught them his love of the outdoors. To hunt, fish, trap, caring for animals and how to farm. Richard always enjoyed going to family functions, going to ballgames watching his kids and grandkids or being there whenever someone walked across the stage for their diploma to graduate high school. Without a doubt, his best memories in life always included his lifelong partner, Dorothy, going to visit family, out to eat or just riding around the block everything was better Together. Richard was a great husband, father, grandfather, hunting partner and one of the best friends many will ever know. He will be missed by all.

Besides his parents, he was preceded in death by two brothers, John Ayler Jr. and Delmer Ayler.

Services were held Tuesday, October 16, 2018 at the Heart Of Life Church, Garden City, Missouri with burial in the Elm Spring Cemetery, Elm, Missouri.

Family suggests memorial contributions may be made to the Crossroads Hospice.
To order memorial trees or send flowers to the family in memory of Richard Ayler, please visit our flower store.