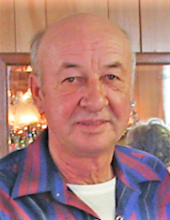 Richard Danny Vaughn, 78, of Pleasant Hill, was born, January 5, 1942, in Pleasant Hill, the son of Bernie Edwin and Lula Blanche (Walker) Vaughn. He departed this life, Monday, May 25, 2020, at the Redwood of Raymore Health Care Center.

Danny was employed as a heavy equipment operator for Pittman Construction and was a member of the Operating Engineers Local #101. He was a member of Jewel Lodge #480 A.F. & A.M. He enjoyed playing the fiddle, guitar and the mandolin with various local country music bands and he loved tinkering around in his shop at home.

Visitation was held Thursday May 28, 2020, at the Stanley-Dickey Funeral Home, Pleasant Hill, Missouri.