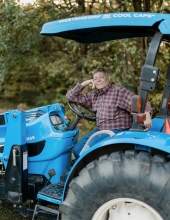 Richard Wayne Blackwell, of Peculiar, Missouri, was born November 6, 1957 in Kansas City, Missouri, the son of Danny Jo and Georgia Ann (Adams) Blackwell. He departed this life on Wednesday, March 30, 2022 at his home surrounded by love and family at the age of 64 years, 4 months and 24 days.

On October 23, 1987, Rick was united in marriage to Juanita Mae Weaverling in Kansas City, Missouri.

Rick graduated from Raytown High School in 1976, after which he went to work for Hallmark Cards where he held many roles until retiring in 2015 with 38 years of service. One of his first jobs at the age 16, was driving a grain truck hauling fescue seed from his Uncle Elzie’s farm in Weaubleau, Missouri. Rick was an active member of Cornerstone Community Church since 2003, an Eagle Scout and former Scoutmaster, the current president of the Public Water Supply District #7 and a volunteer delivery truck driver for the Shepherd’s Staff Food Pantry for six years. He enjoyed fishing, hunting for deer, turkeys and quail, and spending as much time as possible outdoors. Whether for himself or others, he enjoyed mowing, clearing snow, building, and completing home repairs. Rick was most proud of his design and construction of his home garage and children’s playset. Immediate and extended family was very important to Rick. He was always ready and willing to help family, friends, neighbors and those in need. Rick had a tool and plan for anything that needed fixing.

Besides his parents, he was preceded in death by his infant brother, Kenneth Jo Blackwell.

Rick is survived by his wife, Juanita Blackwell of the home; his children, Breanna and John-Michael Lamb of Peculiar, Missouri; Brandon and Samantha Blackwell of Harrisonville, Missouri; Sammie and Tommy Ward of Belton, Missouri; his grandchildren, Hailey, Danny, Elsie, and Emmalynn; his sister, Sandy and husband Mark Greenstreet of Oak Grove, Missouri; other relatives and many friends.

A Celebration Of Life Service will be 10:00 a.m., Wednesday, April 13, 2022 at the Cornerstone Community Church, 1704 Waters Road, Harrisonville, Missouri.

Family suggests memorial contributions may be made to the Cornerstone Community Church Memorial Fund.

To order memorial trees or send flowers to the family in memory of Rick Blackwell, please visit our flower store.