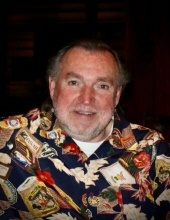 When Rick was just two years old his parents Bill and Ola Stubbs made the decision to move to Kansas City so that they could provide their family of 7 children, the best opportunities. While keeping their homestead in West Plains, Rick was able travel back and forth between Kansas City and West Plains.

He spent many of his younger years exploring the hills of West Plains; making many fond memories that he held close and dearly to his heart. Although he made his life in Kansas City, West Plains is where his roots were, so much so, that he would drive his family down there most every weekend ensuring he instilled the balance of city and down home life in his kids.

Rick was a man of great strength; a man with a strong, creative mind; a man that had a giving soul and a big loving heart. He was a man that could make the smartest person question themselves and grin inside doing so. He was an artist, and architect, a builder and a mentor, he loved his horses and all types of livestock; as well as going to rodeo. A jack of all trades and a master of them all too! Above all these things, Rick was one of the best fathers anyone could ever ask for and loved his grandchildren more than anything.

Two Thousand Twenty-One marked the 50th year since Rick met the love of his life Nita Sparks. They joined their hearts and hands in marriage June 10, 1978. With his loving wife by his side, Rick crafted a home in Cleveland, MO to raise their daughter, Crystal and son, Jacob. Rick was a great craftsman and even better construction manager. He could dream up some of the most amazing designs and make them come to life. Some of the best designs were drawn on the back of a napkin or an envelope. If you could think of it, he could design and build it. Even though Rick might have been in the construction business and you would think jeans and boots were a staple, he did it in style, so much he was honored with a Distinguished Gentleman Award for the gentleman who looks as though he stepped out of the “Gentleman’s Quartly Magazine” 24 hours a day 7 days a week.

Unfortunately, Rick was diagnosed in 2009 with MS. This horrible disease robbed his family of him way too soon. Rick is survived by his wife Nita, his daughter and son-in-law Crystal and Jason Grote; his son Jacob Stubbs; his grandkids Grace Keeney, Mackenzie Grote, Maverick Grote, Amber Young and his great grandkids Rylan, Teigan, Emma, and Addi; his brother and sister-in-law Garry and Cyndi Stubbs; and sister and brother in-law Peggy and Frank. He is preceded in death by his parents Bill and Ola Stubbs; his brothers Walt and Billy, his sisters Ruby and Mary, and son-in-law Robert Cram.

Rick will be more than missed, but at least we all know he has a perfect Heavenly body and can now go build the most elaborate mansion in Heaven if he wants to. Maybe he will buck some bulls or cruise in a ‘70 Chevelle.

All we really know is that it was quite a party Rick. Well done. We will miss you.

Cremation. We will be gathering to share our favorite memories, our stories, to laugh and remember a wonderful man who is greatly missed, on Thursday May 13, 2021 from 6:00 p.m. until 8 p.m. at Dickey Funeral Home in Harrisonville MO.

Inurnment will take place Memorial Day weekend at the Stubbs Cemetery in West Plains, Missouri.
To order memorial trees or send flowers to the family in memory of Rickey Allen Stubbs, please visit our flower store.